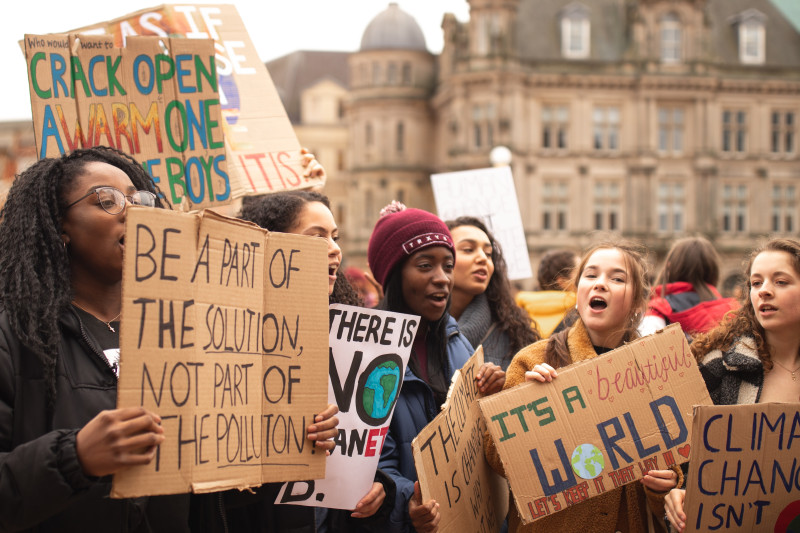 It is well established that, in times of crisis, any inequalities or injustices that are present in society are amplified. Hence, gender inequality has intensified as a result of the climate crisis. Therefore, there is an increased need for female empowerment in the fight against climate change. We can not allow equality to be a casualty of climate.

How are women disproportionately affected by climate change?
Globally, women are feeling the impacts of climate change more intensely than men. Figures released by the United Nations (UN) show that 80% of people displaced by climate change are women. For example, in November 2020 hurricanes Eta and Iota caused immense damage in Honduras and Nicaragua leaving women and children most severely affected. Women are further disproportionately affected by economic instability as a result of climatic changes. This is in part due to women predominating roles that are most vulnerable to climate change. For example, the agricultural sector is repeatedly affected by drought and flooding leaving women, particularly in the global south, extremely vulnerable to poverty and food insecurity. On top of this, men are more likely to migrate from land-based jobs to urban areas to find better work. Hence, women are left to work off the land on low incomes. The World Bank estimates that although women in the global south make up over 40% of the agricultural sector, they only own between 10-20% of the land. This is a huge hindrance to the extent that women can economically progress.

Another huge way in which women are disproportionately impacted by climate change is through the increased occurrence of violence against women. For example, increased droughts and extreme weather events have resulted in longer journeys for women to collect food and water. A 2020 UN article states that women are more vulnerable to sexual assault and violent attacks as a direct result of taking these longer journeys. Furthermore, in cases where men have left the household to find work elsewhere, families are left to fend for themselves which increases their risk of experiencing violent attacks. To make matters worse, a recent review by a group of researchers in London found that natural disasters are associated with an increase in violence against women due to increased stressors, lack of law enforcement, lack of health services, and a deepening of existing inequalities. Climate change is going to continue to trigger extreme weather events and natural disasters. Hence, sufficient services need to be established to protect women from the impending increased occurrence of violence.

Pro-environmental behaviour and female empowerment
It is well established that women are more likely to engage in pro-environmental behaviour than men, but the adverse effects of promoting this narrative are less understood. In a study conducted by researchers at Penn State assessing gender and environmental behaviour, they found that men could be discouraged to engage in pro-environmental activities such as recycling out of a fear of being labelled feminine. Similar concerns have been established concerning men's reluctance to adopt vegan or vegetarian diets. These findings suggest that the narrative that links femininity with “greeness” has resulted in men being less inclined to act pro-environmentally. This in turn puts undue pressure on women to be the solution to environmental issues associated with climate change. For example, many studies have pointed towards the “eco-gender gap” where green branding is directed solely towards women.

Instead of focusing on the extent of women’s natural inclination to act pro-environmentally, the focus should be on empowering women to be more economically prosperous and improving their careers and health. This would have significant positive effects on the climate. A report by Project Drawdown estimates that women’s family planning and education would reduce carbon emissions by 85GT by 2050. Furthermore, empowering women to have choice in reproductive matters would result in slower population growth which in turn relieves stress on ecosystems and allows resources to recover. As a result, women would have more time to focus on their careers and find financial stability. Notably, studies have shown that women make better use of the land they work on as they cultivate a variety of different crops in order to provide adequate nutrients for their families. This protects and enhances the soil for further use. Unfortunately, women are less likely to own land or have access to loans which results in less constructive sustainability decisions being made concerning agricultural land use. Initiatives such as climate-smart agriculture are necessary to protect the legal rights of female farmers and to empower them to utilise their knowledge of the land and consequently be sufficiently economically rewarded. Furthermore, the over-representation of white men in climate change decision-making processes needs to be counteracted with more female leadership within the climate change political sphere. A study assessing female representation in national parliaments across 91 countries found that female leadership was associated with more stringent climate change policies and lower carbon emissions. Recognising women’s ability to tackle climate change and empowering them through law, funding, education, and protection is central to preventing further gender inequality.

From forced displacement to economic instability to violence, women bear the brunt of climate change across the globe. The necessity of female empowerment to simultaneously tackle gender inequality and the climate crisis is evident. Women, especially poor women of colour, are suffering the most. Yet where, in environmental policy, are the voices of the women who are dying in heatwaves? Of young Ethiopian and Pakistani girls dropping out of school due to drought and flooding? Without change, progress on gender equality will be undone as the impacts of climate change become more frequent and more deadly.

Sustainable PR represents Proudly Made in Africa and MIA chocolate who do incredible work in Africa. For example, MIA created a perennial Girls Education Fund and supported projects to combat COVID-19 and fight famine in Madagascar. Learn more about both here and here.