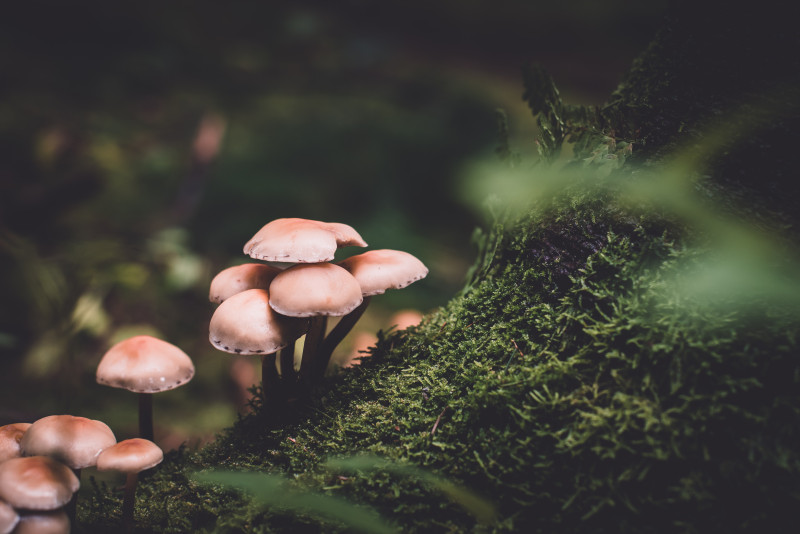 Fungi is the umbrella term for thousands of different organisms from mould to mushrooms. Each of these organisms has varying properties: some harmful, some medicinal, some magical... Most importantly, the fungi kingdom quite literally threads together our global ecosystems through its underground mycelium network. Hence, the protection of fungi is central to the health of our planet. However, the potential of fungi to be an ally in protecting our planet has not yet been fully harnessed. This article examines what humans can learn from fungi to tackle climate change.

Interconnectivity is circular
Human beings have much to learn about circular living, and fungi have the answers. Most human beings live deeply separate lives fuelled by individualistic philosophies that inhibit our ability to conceptualise ourselves as being connected. In contrast, natural systems such as decomposing fungi live connected lives that thrive off circular and codependent relationships. Essentially, circular living is an all-encompassing way of living that involves sharing, leasing, reusing, repairing, refurbishing, and recycling existing materials and products for as long as possible. Fungi mimic this way of living in the natural world. In essence, plants provide fungi with food in the form of carbohydrates, and in return, the fungi help the plants suck up water and nutrients. Similarly, humans provide plants with carbon dioxide and plants provide humans with oxygen. These relationships are both sustainable and non-wasteful and exemplify a circular way of living.

Linear systems
In a linear world, things are made, used, consumed, and disposed of. In other words, a dead-end system of landfills and hazardous waste. Landfills are extremely bad for the environment and fungi have the potential to regulate this damage. The most concerning aspect of landfills is their release of methane gas. Notably, a study in the Journal of Environmental Quality found that fungi have the potential to capture and reduce methane emissions from the atmosphere. Another problem with landfills is plastic waste. A study carried out at Yale University found that several fungi species were capable of degrading plastic into organic matter. These fungi are capable of plastic decomposition in particular conditions that are compatible with landfill sites. Hence, fungi have the potential to break through linear systems such as landfill waste systems by applying their unique recycling capabilities. In doing so, the environmental impact of destructive linear systems can be reduced.

Fungi are master-decomposers
Humans have evolved to have individualistic world views fuelled by capitalist ideology. Unfortunately, capitalist ideology is rooted in over-consumption, and over-consumption is coupled with a surplus of waste. To address the issue of excess waste, humans can look to fungi and take inspiration from their decomposing abilities. Fungi are master decomposers because they decompose the world around us. If fungal decomposition did not take place, we would be buried deep in the bodies of animals and plants. In other words, fungi decompose dead matter and distribute the nutrients they retain back into the cycle. Their recycling abilities don't stop there. Scientists have been studying how fungi can collect heavy metal waste from their surroundings and store it in their mushrooms. For example, Finnish researchers at the VTT Technical Research Centre have found that fungi can filter traces of gold from electronic waste so that it can then be recycled. Similarly, a study carried out by a group of Indian and South Korean researchers found that fungi are capable of filtering lead out of wastewater at an e-waste recycling facility.

Ultimately, humans have a dysfunctional philosophy around waste. To combat this, human waste systems should take inspiration from fungal waste systems and engage in constructive and non-wasteful relationships with nature.

Bio-based solutions
The role of fungi in the restoration of our planet has not always been taken seriously. Although in recent years, there seems to be a shift in this way of thinking. Scientists are now harnessing the biological potential of these organisms in ways that do not exploit natural resources or harm our planet. For example, many environmentalists and scientists advocate for a shift from our petroleum-based economy to a bio-based economy. A study conducted by BioMed Central examines how new fungal-based products could be integrated into the market. For example, items made from animal leather could be replaced by identical products made from pure fungal mycelium. Other studies have looked at the potential for fungi to sequester carbon dioxide and fight climate change. Studies have also shown that mycelium can degrade crude oil, plastic, and absorb radioactive contaminants and heavy metals. With more research, fungi’s ability to fight against climate change could be fully harnessed.

Fungi’s potential to be a key ally in the fight against climate change is undeniable. The solutions to climate change are all around us. We need to let nature be the guide.