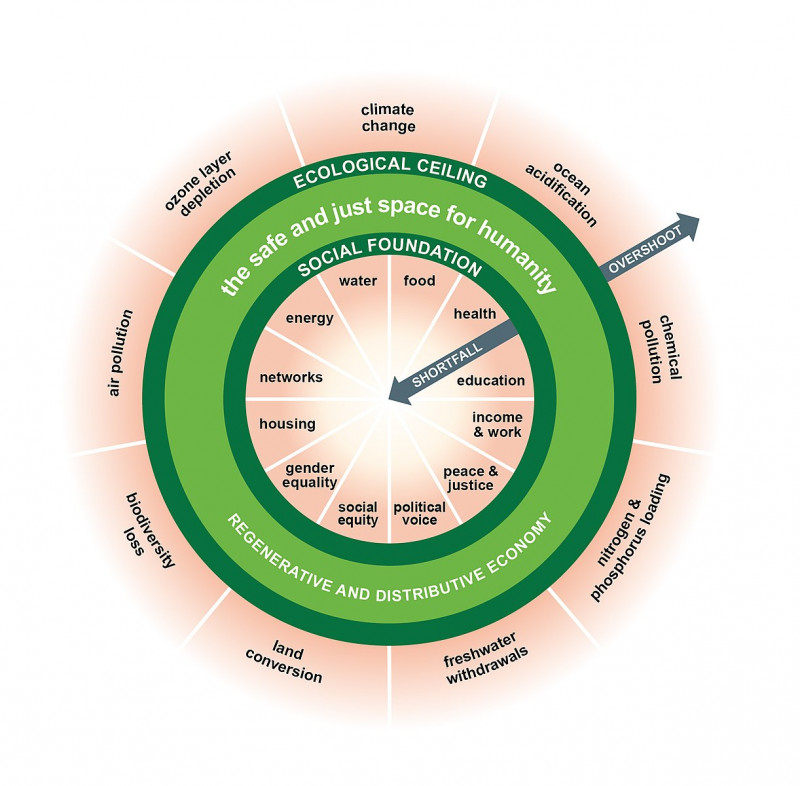 If you follow President Michael D. Higgins on social media, you might be familiar with the phrase ‘doughnut economics’. Since President Higgins discussed this model while addressing the EEAC/NESC Conference 2020, the term ‘doughnut economics’ has been shared across many social platforms in the last few weeks. Although this term does not mean the real-life sweet doughnuts or driving doughnuts, it is just as mouth-wateringly delicious and thrilling for all of the environmentalists out there.

The doughnut is a visual diagram, as shown above, which is central for sustainable development by combining the concept of social boundaries with the concept of planetary boundaries. This model is a relatively new theory, devised by Kate Raworth, which allows people to thrive while saving the planet. The centre of the doughnut holds the proportion of people who lack access to things like equity, healthcare and education. The outer layer depicts the nine life support systems or planetary boundaries where other people tend to surpass the limit of.

The economy is deeply embedded in the environment. It uses energy itself and then emits pollution and waste. This model enables the world to stop putting pressure on the issues in the outer layer and it reframes and sets new goals in economics. This allows for the needs of the people to meet in line with the needs of earth. It is not capitalism, or communism nor eco-authoritarianism, it is simply a limit of the pressures people can put on the planet, but also what people still need from the planet in order to survive, such as, humans need to convert the land into food to be able to live.

So, why should you care? The centre of the doughnut is not where anybody should be; without food, water or shelter. The idea is to pull the ‘rich’ countries back from environmental limits and to pull developing nations out of social limits. Ideally, everybody should fit in the ‘safe’ green space where both planetary boundaries and social boundaries fall into harmony together.

Amsterdam is the first city which will be implementing this contemporary economic system. As climate issues are catching up on the world in the 21st century, it is important that people begin to make systemic changes needed to prosper. To encapsulate why we, the people, should care is to listen to President Michael D. Higgins, “this means we can improve human wellbeing on a global level while simultaneously preserving the preconditions for a safe, healthy planet and the future wellbeing of its peoples.”